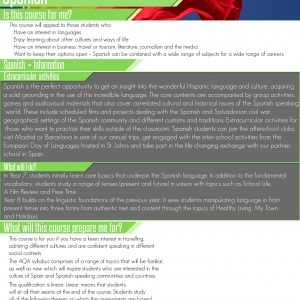 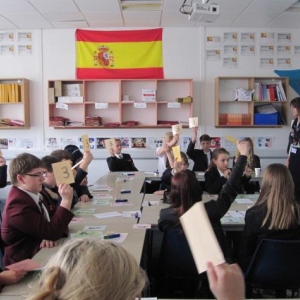 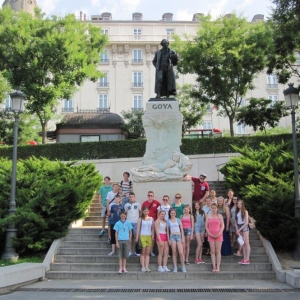 TERM 1- Your son/daughter will embark on the transition from Primary both in body and linguistically. They will learn how to describe the differences between Primary and Secondary schools in Spanish/French, explore the wonderful, exciting world that being a Spanish/French speaker affords you.

TERM 2- Now that confidence is high both orally and in written form your son/daughter will expand their Spanish/French knowledge and culture by working closely on a El Salvadorian film in Spanish or Les Choristes in French. Both ‘Innocent Voices’ and 'Les Choristes' will not only allow students to explore a distinct version of the language but also provide them with a look at what life is like for a Year 7 in El Salvador 1981! or France prior to the Second World War.

TERM 3- With Spanish/French summer sun arriving to Bishop Auckland in time for the summer term, students will look at expanding their grammatical knowledge and display a fair and fluidity in written and spoken Spanish/French based around everything they do for fun in their free time!

TERM 1 – Now that confidence has been built in the language it is time to turn your hand to grammar, students spend the first term getting to grips with a various range of tenses to allow them to use the building blocks of either language to lay the foundations for future success, students will study holidays in French and all the delights of Spanish cuisine will be studied and tested in Spanish lessons.

TERM 2 – With the new GCSE in mind and a move to terminal exams, students will spend this term building in skills that will help them to progress in these vital examinations. All four key skills will be covered and extra skills such as translation and dictation will be added to help our linguists flourish. French students will focus on their local area and their own fashion sense whilst the Spanish students take on the role of a film director for the term.

TERM 3 – The final stepping stone to GCSE, French students will enjoy the delights of learning about famous French cuisine in a term filled with everything they could need to make the most of their French holiday, likewise in Spanish students are firmly focused on all things holiday and what the summer will bring.

Spanish Exchange – Zaragoza - All students studying either Spanish or French are eligible to undertake the opportunity of a lifetime, to receive a Spanish student into your home for a week and to live for a week in the beautiful city of Zaragoza and attend school as a real Spanish student.

Spanish is the perfect opportunity to get an insight into the wonderful Hispanic language and culture whilst working towards to gaining a GSCE qualification and acquiring a solid grounding in the use of this incredible language. The art of communicating in a foreign language is of a tremendous importance in the current job market and Spanish is today the second most spoken language in the world.

In Year 9 MFL lessons students have the opportunity to develop communication skills for everyday-life situations in different topics. Whether focusing on school and education, holidays and free time activities, jobs, music or cinema, all students are preparing and developing their listening, reading, writing and speaking skills to complete exams in each skill area at the end of Year 11 (25% per skill).

The core contents are accompanied by group activities, games and audiovisual materials that also cover correlated cultural and historical issues of the Spanish speaking world. These include scheduled films and projects dealing with the Spanish and Salvadorian civil war, geographical settings of the Spanish community and different customs and traditions. Besides, students work on a daily basis in small groups with the foreign language assistant to improve their speaking skills for the exam and take their learning experience to an authentic and enjoyable level.

In addition to this, the modern foreign languages department is constantly working to enhance the extracurricular activities for those who want to practice their skills outside of the classroom. Spanish students can join the afterschool clubs, visit Madrid or Barcelona in one of our annual trips, get engaged with the inter-school activities from the European Day of Languages hosted in St. Johns and take part in the life-changing exchange with our partner school in Spain.

This qualification is linear. Linear means that students will sit all their exams at the end of the course. Students study all of the following themes on which the assessments are based.

Students are assessed in Speaking, Listening, Reading and Writing.

St John's are currently 10th in the world for our scores and progress on the global language learning website Language Nut.

Points only last for 30 days so students should keep accessing Language Nut to build up their points, earn rewards and practice for their upcoming assessments or exams.

Some year 9 students have been on a recent heritage project visit and are working with their class teachers to translate tourist information into French and Spanish for any foreign visitors to the local area. Examples of the leaflets will be ready very soon.

Year 7 and 8 students were able to use their French skills recently to talk to a native French speaking visitor who came to do some work with them in school. They were able to ask and answer questions in French and worked very well.

On Monday 27 March, 15 students from Year 9 and 10 took the long journey from Bishop Auckland to Senlis, France to take part in the Le Fèvre project with our partner school Collège Anne-Marie Javouhey (AMJ).

Thursday September 24th saw St John's transformed into a sea of colour, excitement and flair as the MFL department hosted the European Day Of Languages on behalf of the Catholic Partnership.

Over 150 Year 8 students took part and viewed a live theatre production in French. It was a very rewarding experience to see students listening to the French they learn in class and understand it in a professional production. Many Thanks to Mrs Holloway, and the Performing Arts team who helped to organise this amazing event.

We are nearly an International school!

Mr Robertson along with the MFL team have successfully applied for St. John's to become an International school. The initial award we are delighted to say has been approved, below is the feedback from the assessors of our bid.

On Sunday 5th October, 15 students from Year 8 and 9 took the long journey to Megeve from Manchester to take part in an exchange with College Emile Allais.

On Sunday 21st May, 20 excited students from Year7 took the long journey to Zaragoza, Spain from Newcastle to take part in an exchange with our sister school Colegio, El Salvador

This was an invaluable exchange that allowed students to immerse themselves in a different culture, and put their knowledge of Spanish into practice within a meaningful context. In addition to this, St John’s students have made some lasting memories, and more importantly developed life-long friendships!